Hidden amongst modern urban brick and mortar landscape sits a small piece of young Canadian history almost long forgotten. “Tear it down” was the outcry of most County residents, “make room for more parking for Sobey’s customers.” The house that seemingly was falling apart, formerly surrounded by thick brambles and overgrown hedges along the edges of the Gardiner’s plaza parking lot, has been saved from the wrecking ball by a young man who was able to recognize the beauty and the history of the building now known as The House of Falconer.

Walking inside the front door is a transformative experience. Once inside, it is like stepping in through a portal of time. The grandeur of the house can be felt despite the obvious work still yet to be completed. The ornate fireplaces and original medallions on the ceiling are highlighted by the natural light that filters through each room. Houses like this are not built anymore and the current owner has a passion to preserve the integrity of the house and its architecture. Where no one could recognize its worth, Alex Fida did and he dreamed of being the one to bring it back to life.

From a really young age Alex had taken an interest in older buildings and different building styles. His background is in interior design with a specialty in preservation, and the House of Falconer always held a fascination and a special kind of magic for him. He had known the Minakers, the most recent owners of the property, for approximately ten years and he had expressed an interest in the house but initially was never able to come together on price. It was assumed that a larger corporation was going to come in and buy the property at auction, demolish it and the building would be gone, but at the end of the day the house just didn’t sell. And then Paul Minaker unfortunately passed away. His widow Marilyn knew that Alex had a vision to restore the property to its historic roots . Alex had previously completed some notable restorations in the County including a log cabin he had brought from South Bay to the property in Bloomfield at Angeline’s.

For Alex, this house was a dream project. The Minaker family placed their trust in him because their desire was to see the house live on. And Alex really wanted to open the house up to the public. Although the house needed a lot of work, the creative community was able to look past the obvious challenges and see the house for its potential. Many artists have rented out the space for their studios, taking advantage of the natural light and ample space in each room. That was the inspiration for the pop-up shops and since opening he has been filled to capacity.

Alex is amused by how many people have approached him, now that the over growth has been cleared away, and telling him that they didn’t even realize this house was here. People have shopped in the plaza for 50 years and most didn’t even notice the building. Those who had known it was there didn’t realize that the front entrance was where it was. Even Alex hadn’t been able to appreciate just how beautiful the interior was based on the outside facade alone.

Alex describes himself as sort of an “odd duck”. When he was younger he loved to attend auctions or explore antique shops and garage sales. He had always taken an interest in trying to salvage things, seeing the value in things that other people thought of as garbage. He attributes that to the fact that he was a bit of a loner, very unsure of who he was. The one thing he was self confidant about was the ability to see the beauty in things that others couldn’t see. He would go to garage sales and constantly be bringing home things. His dad would question why he would bring home so much junk,  but he would clean it up, and re-sell it. As a young boy he had a mini-shop set up and was making money from his garage sale finds. With The House of Falconer, he can already see the finished result in his mind’s eye.

Alex was born in Geneva, Switzerland and his family immigrated to Canada when he was one. They settled in Bloomfield and his parents opened up Angeline’s. When he graduated from high school he studied overseas in Europe for a couple of years, living for a time in Florence, Italy and Vienna, Austria. It was after his father died that he moved back to the County and helped his mother run the business. But living in Europe gave him a deeper appreciation and broadened his perspective for preserving our country’s heritage. The one thing with Canadian heritage, he says, is that it is very young and he feels that it doesn’t carry the same value with Canadians as it would in places like Europe. A lot of what was built here are derivatives of what was happening in Europe at the time and he finds it sad that the weight of importance on our heritage is diminished by the majority of our culture.

Alex considers himself very fortunate, at just thirty years of age he has been able to live in some of the most fascinating cities in the world and he has the benefit of a very supportive family. He is accomplishing more at thirty than what most accomplish in their entire lives.

The House of Falconer,  has been affectionately named by Alex after one of its former families.  In The Settler’s Dream by Tom Cruickshank and Peter Stokes the house is known as Grove Place.  But regardless of it’s name, the home has had several notable families dwelling within its walls giving the house a rich history. Alex has estimated that it was built circa 1830’s as a limestone regency cottage, and it was purchased from Nathaniel Niles in the fall of 1857 by Captain John Pepper Downes only partially developed. Capt. Downes was an accomplished artist and it was likely he who finished the Tudor style cottage with the gothic dormer that goes across the main section of the building. The front entrance-way was also likely added around that time. The home was later sold to the Allison family who were well-known merchants in town. The Walton family owned it after that during the 1940’s to the 1950’s, and Dr. Walton who was a local dentist operated his practice out of the formal dining room.

From the 1950’s the Falconer family owned the home, and they are mostly known in the County for the antique shop and jewellery store House of Falconer, from which the house now derives its name. James and Winnie Falconer had one child, a son. Thera Minaker married their son, and there are two versions of the tale of what happened to him. The family version is that he went out one day for a pack of cigarettes and never returned. The local legend is he was involved in a bank robbery in Belleville and he fled to Central America. Either way, he was never seen or heard from again. The Falconer family took Thera in as one of their own and they took care of one another. When J.B. Falconer passed away it was the hope that their long lost son would come back to claim the estate, but he never showed up. Thera inherited everything. Alex has named the house in honour of Thera and her time here during that era. 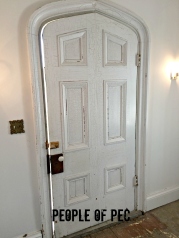 Alex has just finished his second season with the house, and while there is still much work to be done on the house, the progress has been substantial. This past Spring he took apart the carriage house at the back of the property, catalogued all of the pieces and has placed them into storage. He was able to salvage 80% of the entire building. Once he pours the foundation he will be rebuilding it using the original materials. And the kitchen at the back of the house is being meticulously restored. The sagging foundation was repaired, and the stone walls were built brick-by-brick to join with the newly levelled foundation. Alex describes it as the most labour intensive, back breaking work he has ever done, but so completely satisfying.

Outside the grand doorway of the House of Falconer is the bustling modern day town of Picton, but once inside the foyer a person is insulated from the outside world; the sounds are absorbed by the thick stone walls and the light creates an atmosphere that is altogether magical. It is difficult to imagine how anyone could look past the majesty and grandeur of the house and want anything else but to see it restored to its former glory. Alex is perfectly suited to the task.

5 thoughts on “The Magic & The Mystery: The Man Behind House of Falconer, Alex Fida”