It took less than 72 hours.

In less than 72 hours a community came together in an astounding and unprecedented show of solidarity.

In less than 72 hours over 400 people descended onto a church in Picton, ON in peaceful and colourful response to a bulletin statement that sought to invalidate an entire group of people.

It takes courage to go to someone who believes you are against “God’s revealed truth” and say “I’m going to love you anyway.” Some would argue that the statement made by Rev. Chisholm of St. Gregory the Great Roman Catholic Church this week, is simply his right to express his religious beliefs and that it’s not hatred. But imagine someone saying to you that something you have no control over, something you like about yourself, something that defines your love and life relationships, and something that characterizes who you are, is inherently wrong. At the very least it sounds intolerant, at the most it sounds like willful disagreement with an unwillingness to accept anything different. On the surface it may not sound hateful, but these kinds of public statements encourage others who aren’t as diplomatic with their phrasing. And those kinds of people absolutely DO HATE. They hate everything about people who are either gay, bi-sexual or transgender. They are unapologetic about it. They proudly stand on every soap box available and talk about how these people are abominations, how they are sinful and disgusting, how they are going to burn in hell, how they are harming our children, and how they are destroying “family values” with their perversion. And some who would spout these ideologies take their hatred one step further and respond with physical violence. To those who live in fear everyday of encountering someone who is hateful, prejudiced and prone to violence, the statement in Gt. Gregory’s church bulletin, was an invitation to hatred if not hate itself.

The community response was swift and fierce. Parents, teachers, former students of St. Greg’s school, and residents of Prince Edward County were quick to counter the statement with messages of rebuke. The administration and the students of St. Greg’s did not adhere to this line of thinking. Parents refused to send their children to Mass on Friday under the leadership of Rev. Chisholm. Teachers stood outside the school Friday morning with banners that offered messages of assurance that THIS school was a safe space. The screenshots were shared endlessly on social media, and before long media outlets were contacting people within the community for comment. And among this flurry of interaction and discussion, a young man by the name of Curtis Jeffrey decided to bring his message of love to St. Greg’s.

Curtis is a young man in the LGBTQ community and someone involved in the new LGBTQ safe-space youth group here in the County. He created an event. The priest wanted to discourage his congregation (and “all Christians”) from participating in Pride activities, so instead he was going to bring Pride to St. Greg’s. His intention was a peaceful show of love and inclusion. He had allies who were immediate in their intent to join him.

The responses of people clicking in response to his event invitation trickled in Thursday night and Friday, with perhaps approximately 150 people indicating their intent to come. But as with Facebook events, his expectation of those people to actually come was low. He anticipated maybe a few dozen or so people.

Sunday morning at 8:30am, there was already a dozen or so people outside the church on the sidewalk. They had rainbow flags for sale and were donned in brightly coloured apparel. Curtis was draped in his own large rainbow flag like a superhero. By 9:30am, the amount of people who had walked up to the sidewalk where the demonstrators were standing had grown exponentially. Signs were everywhere. They had several sayings that expressed their support and affirmation for the LGBTQ community. It was a collective message that said they did not condone the statement made by Rev. Chisholm. But even so, as more and more people from all walks of life, all sexual orientation and all ages approached in silence, the crowd soon grew far beyond imagination.

There was news media taking pictures and conducting on camera interviews. The crowd was running out of places to stand. Without intention, they had been pushed onto the front lawn of the church. OPP who were present at the request of organizers, got involved to alleviate any concerns by the church leadership who had now come out of their building to view the spectacular sight on their front lawn. They asked that the demonstrators move off the property. They complied. When it appeared there were too many people blocking the entry way for parishioners to come to church unhindered, they parted like the red sea in an effort to not disrupt or intimidate. But the size of the crowd was intimidating, despite their silent waving of flags and friendly greetings. Some parishioners showed up to church dressed in rainbow scarves.

One gentleman pumped his fists into the air in celebration as he walked into church. One lady turned around as the crowd applauded when she walked into the church and made a face of displeasure. But overall the response was friendly and peaceful. There was no chanting. There was no messages of anger or hatred. There was no violence. 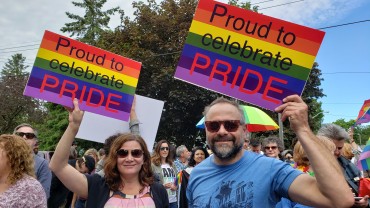 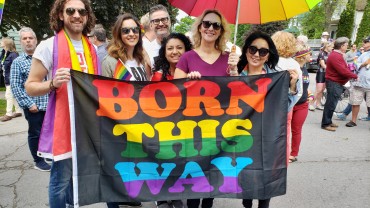 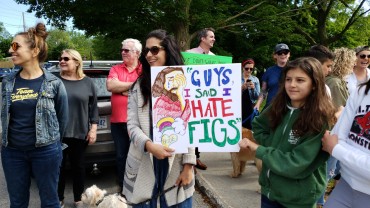 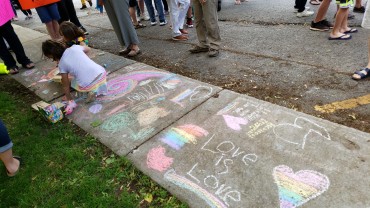 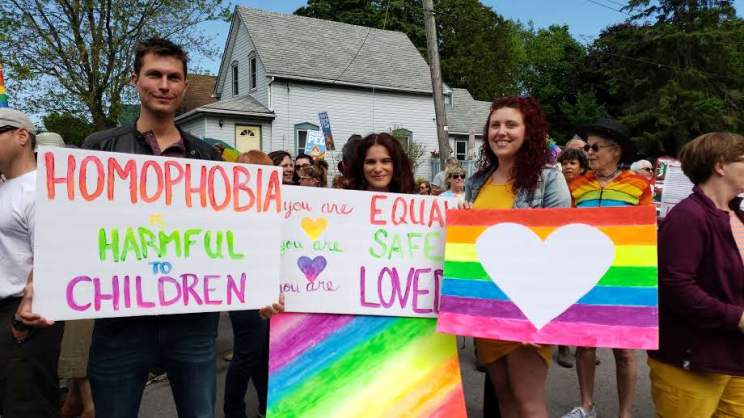 But there was singing. There were children drawing rainbows on the sidewalk. There were hugs–a lot of hugs! There were rainbows everywhere you looked. There were smiles and joyful chatter. There were giant rainbow flags waving in the sunlight that streamed past the peaks of the church’s steeple.

What was supposed to be finished by 10am extended well beyond and Curtis stood in silent appreciation for what he and others had started. He soaked in the love and support. He choked back emotion as he expressed that he actually didn’t know how to end this. He didn’t want it to end. It was wonderful. It was beautiful. It was love manifest.

The OPP provided Curtis with an option. Upon speaking with him briefly after they had intervened between the church and the people, they had suggested perhaps a silent march down the road toward MacAuley Heritage House. They had agreed to block off one intersection that would allow for the crowd to peacefully and safely disperse without disruption to the church. It seemed like the best option.

So with Curtis in the lead the crowd slowly wandered down the road. A few ladies

started singing a familiar tune as we walked, but it never caught on. That was okay, the atmosphere was not diminished. The joy and merriment continued on down the road. Looking back toward the approaching masses with their signs and waving flags, it was apparent how many people had actually shown up to display love. Conservative estimates thought perhaps 400 people, but at the swell of the demonstration others have suggested it was closer to 600 people. And now with numbers slightly diminished but still massive in scale they walked the short distance down Church Street to MacAuley House crossing one intersection, a police escort in front and in the rear. It was Picton’s first ever Pride parade.

As the crowd dispersed and cars passed by the scene, drivers honked their horns in support and celebration. Flags continued to wave well beyond the assembled crowd and with the mid morning sun smiling down the pride demonstration came to an ending much as it began.

On a Sunday morning during Pride month, a community gathered to communicate a message.

That message was love. Love is love and knows neither race, gender or religion. Prince Edward County made its position on the matter quite clear. Hopefully the message was received as it was intended, and in the future our community can continue to support this sometimes vulnerable community.

It took less than 72 hours to create such a massive Pride event that no one had anticipated or planned.

Less than 72 hours to dismantle a message of exclusion and hate that the LGBTQ community has been subject to for generations.

In less than 72 hours, love won in Prince Edward County.

4 thoughts on “Take Me To Church: A Message of Pride for St. Gregory’s Catholic Church”