A Collective of Musicians Pay Homage to Kait Shannon

Everytime a bell rings, an angel gets her wings. So here are your wings Kait

Music flows as abundantly as wine here in Prince Edward County, and the selection is just as smooth and pleasant. Today in Picton United Church, the line-up of musicians who volunteered their time and talent to pay tribute to Kait Shannon was a “who’s-who” of County musicians. The talent and richness of the musical talent was never more evident as it was today, as the varied artists who have peddled in melodies and harmonies sang their hearts out with sincerity and humility in honour of one of their own.

Suzanne Pasternak helped to bring Kait’s vision to fruition in record time after her passing on April 19, 2018. It had been Kait’s wish, as made abundantly clear by both her father and mother, that she wanted her life and memory to be a celebration of the one thing she was passionate about: music.

Lenni Stewart took the stage early on during the day, she had a cute little laugh as she addresses the audience inviting them to sing along, but not before giving a sassy little tilt of her head and a grin that says “watch me light up the room”, and she does. She takes a glance over at Jeanette sitting front row, with her shorn head that was most evidently a show of solidarity for her daughter, and she starts singing skat that is both playful and bold. In song, it is a moment that is being shared between Lenni and Jeanette, but the rest were fortunate enough to witness this. And then Rick Zimmerman takes the stage, and while being completely self-depracating because he had the misfortune of following an act such as Lenni, he proceeds to sing  what was in equal measure both rousing and emotional. Rise Again was his song selection, and it had the distinct feeling of life marching on triumphant even in the face of unquestionable grief. Not a dry eye left in the house, and his song ended with enthusiastic applause.

Jessica Bell, who sang Flying Free gave a sweet and sure performance resonating with emotional tribute and sincerity. She hit high notes effortlessly like a song bird. Jeanette beamed with pride afterward, explaining that she had known her since she was just a tiny four-year old following her around at performances. And Amy Rutherford, accompanied by Ben Vandergaast was likely the show stopper with a soulful, deep and hypnotic, rendition of At Last by Etta James. It was a song Kait had sung numerous times in her young career. And Amy did the song more than justice, as if she were channeling the very spirit and passion of her longtime childhood friend.

Caleb and Megan Hutton of Instant Rivalry, and Gavin Massey were also a part of the lineup, and it was mentioned more than once that these young people had been integral aspects of Jeanette’s creation, Picton Rising Star that had been started in 2008. As Megan was tuning her guitar she cheekily says, “sure, I think we came in second to the tap dancers that year.” and then grins at Jeanette. It was moments like these that were interspersed with tender moments of recollection and enthusiastic applause for each performer.

But these seasoned entertainers were not here for the promotion, applause, glory or accolades today. They were here for Kait. That was made abundantly clear when Megan stopped Jeanette from announcing Instant Rivalry’s current contention in a country music competition they are currently trying to win. It showed how selfless Jeanette is, willing to promote someone else even in the midst of her own grief.

Instant Rivalry stepped onto the stage, like they have countless times before, but this performance was personal. Megan finished her vocal performance with a muffled sob, and the audience once again erupted in applause and a standing ovation. The audience was not there to be entertained, but to display the love and appreciation for the life and love of Kait Shannon. And Gavin Massey’s rendition of The Tragically Hip’s song It’s a Good Life if You Don’t Weaken was aptly apropos.  Cancer does not discriminate, and the theme of Good Downey’s song sung today for Kait by a smooth as butter vocalist like Gavin held dual meaning.

Both Jeanette and Michael Shannon took the stage to say how appreciative they were of all the love and support of the community. Michael spoke expertly about the professionalism and the sincerity of the medical health professionals that took care of his daughter. He paid special attention to mention the compassion and the care the nurses showed Kait. And then Jeanette spoke, with tears in her eyes, and said “You are all our God with skin.” She elaborated,

the support we get as the family enabled us to go [to Kait]…whatever it took for her to feel nothing but joy and peace and love in the midst of the worst battle of her life.

She described Kait’s final days in the hospital room surrounded by her parents, and Hayden her boyfriend, her grandparents and other family members and Kait had looked around the room,

I feel so loved right now.

And then there were other moments where she would say things like this:

I can’t do it, it’s too much. You have to tell all my friends and the community and the people who keep writing, and putting things on Facebook and texting…that they help sustain me Mom. I feel loved, I feel embraced.

Jeanette stood in front of a wall-to-wall church filled with people, and emotionally poured her grief out before family and friends. It was raw and unmasked. But the one thing that was undeniable, was the strength of the love that Kait had felt, manifest in the room this afternoon.

The close of the afternoon concert featured performances by longtime friends Kim Inch and Michelle Found. Their first song was one of Jeanette’s, Turn to Him. Michelle had begun their performance by explaining that she and Kim had been rehearsing this song for months leading up to a conference the two women were singing at. In the days since Kait had passed away, Michelle noted how there were moments where various elements of the song were being shown to each of them as reminders of the song’s message. And then they were accompanied by Mark Despault to sing a song titled Yea Though I Walk written by Suzanne Pasternak just after 9/11 in tribute to the Canadians who had passed away during that horrendous attack on the twin towers. It was sung with revived life today in tribute to Kait, afforded by Kim’s signature sweet vocals and Michelle’s sultry harmony. The haunting melody was sung with a blend of sounds that transported the audience into a depth of contemplative reflection.

And then the final song of the afternoon was sung by every musician who had leant their time and talent for the afternoon, by appropriately singing Leonard Cohen’s Hallelujah. Featuring Jessica Bell, Lenni Stewart, Miss Emily Fennel and Amy Rutherford, it was the perfect way to close out what was a memorable and timeless tribute to a beautiful young woman.

Jeanette’s final words to the audience, in tears of both grief and appreciation, “hold your kids a little closer, and let the petty stuff go.” It was a day that would not be soon forgotten by anyone in attendance. 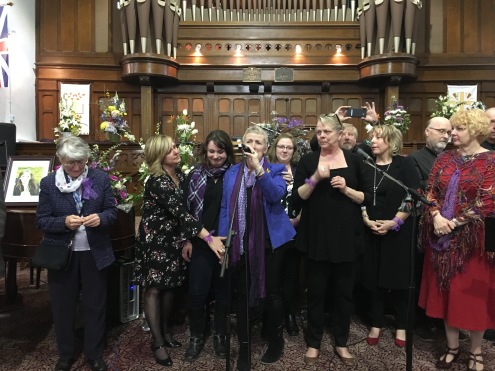 Jeanette addressing the audience at the end with her final parting words. 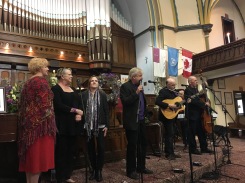 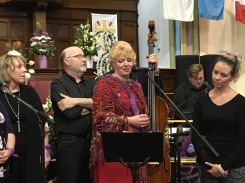 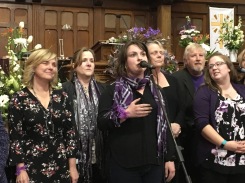 *Not to be mistaken, there were other musicians and singers who were present and gave amazing performances. I did not arrive in time to catch all of their names, but among them were Fraser Hardman and The Frere Brothers.