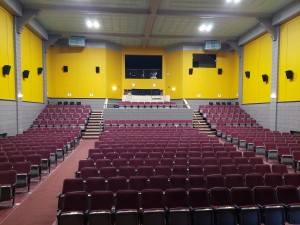 Ricc has been the janitor at The Regent Theatre for years. He doesn’t believe in ghosts. To reiterate–as he did–he doesn’t believe in ghosts. But a few years ago, when he was working the spot light in the loft one evening, he felt a tap on the shoulder. It wasn’t a light tap, it was an intentional and forceful tap that he most assuredly felt. He spun around quickly to see if anyone was behind him, there was not. He explained that not only was no one there, but no one would have had time to leave the space he was standing without being seen or heard.

Many who perform or work behind the scenes at The Regent Theatre have often joked about the ghost of The Regent. They allude to “her”, or call her by name; Louise. Many will tell you, such as Andrew McLuhan (a projectionist), he has been there late at night behind the stage and he has felt the “heebie-jeebies”. So has Colleen Johnson, who had no idea that Andrew felt them too. She said many nights she would leave the fire door open a crack while she let down the fire curtain on the stage after a movie was over. She couldn’t quite describe the feeling, but always felt like she wasn’t quite alone. George, another man who has worked for the Regent for years, said he has heard all manner of strange noises while inside the theatre in the evening or late at night, but that could be chalked up to noises in the pipes or the sound of the restaurant stoves cooling next door. And many staff confirmed that on nights when they were working alone closing up, they would walk around turning out lights, but when they would return to the lobby, the lights to the second floor loft were turned on again. But is the Regent haunted? And if so, by who?

The Regent was built on an 80 year old foundation of a former warehouse back in 1918 by George Cook. The Regent is a rare example of an intact Edwardian opera house, and its stage is one of the largest in Eastern Ontario. George Cook passed away in 1959, and it was his daughter Louise Cook who took on the role of running and operating the theatre. When the Regent Theatre Foundation purchased the building from the Cook family in 1994, the Regent had been dark for many years. Its presence on Main Street Picton is as much a part of the personality and charm of Picton as any of the people who live therein. But is it haunted?

George spoke to People of PEC and said we needed to hear about what happened to Fred. Fred had been cleaning the large chandelier in the auditorium one night, a task that required it to be gently let down with a rope and a mechanism that held it in place so that it could be dusted and cleaned. During the process of raising it back into position it had fallen down on top of him, narrowly missing his head. It was a miracle it didn’t kill him. George said it was like a scene out of Phantom of the Opera. The mysterious thing about it, was the chandelier had been cleaned in that manner often, the rope was about half an inch thick and in no way frayed or compromised. But it was the rope that had broken and caused the chandelier to fall. Was it the work of some paranormal occurrence or was it simply normal wear and tear?

A few years ago, a theatre patron approached Colleen Johnson (current Operations Supervisor for the Regent) and asked her if one particular door had previously been an office. The patron was pointing down a hallway in the lobby toward a brown door that was currently the janitor’s closet. In fact, it had been an office at one point in time. Before it was closed off, it had been the door to a bathroom that was just off from an office. And before that, it had been a cloak room during the 40’s and 50’s. The patron said she could “see” a man standing beside the door, but when Colleen looked down the hallway to the area she was pointing out, there was no one standing there.

And then there was the evening the Quinte Ballet was rehearsing on the stage. George Cook had a very strict adherence when he was alive, that no one was to be in the old projection room during a performance, as it was distracting to the performers. Colleen said she had been walking across the loft, which was formerly the attic and the location of the old projection booth, while the dancers were performing. She was alone, no question, but she heard a very loud and distinct man’s voice yell at her to “get out”.

The loft was built in the late 90’s during renovations, but it used to have a false wall separating the attic from the former projection room. Projectionists used to have to climb over the false wall, using planks to walk across, in order to get into the projection booth. And it is the loft that is the location of some of the most eerily unexplainable occurrences inside the Regent theatre.

Three years ago, there was a show of 2 Elvis’s, a younger and an older version. The fathers of these 2 up-and-coming actors came to watch the performance and support their sons. Shortly after the performance one of the men came and asked Colleen if the theatre was haunted. She asked why he was asking, and he described how while he was standing up in the loft, he felt a distinct tap on the shoulder, yet when he turned around there was no one else up there. And then there was the night one projectionist (name withheld to protect his identity) had brought a cash box up to the projection booth for safe keeping during a show. There used to be a security camera that was inside the projection booth, and Colleen said that she watched in real time as the projectionist placed the cash box down, walked away from it, and then without warning the cash box flew off the table a distance of approximately 3 feet. Colleen asked the man how he made the cash box fall like that, but he simply answered that he didn’t touch it and he had no idea how it fell like that. He also was white as a sheet. He didn’t work for the Regent for too much longer after that, and he was never comfortable in the projection booth again.

Colleen said that years ago, during the renovations to the theatre, her husband Brian Johnson had taken photographs inside the auditorium and he had captured “orbs” which were not visible to the naked eye. She wonders now if he still had them. And even the night People of PEC sat in the lobby at the box office desk an unexplainable thing happened. Colleen and Francine (of Shatterbox Theatre) had been describing the many different weird things that had happened over the years while we were waiting for Red to open its doors. We all had walked away from the desk and we were standing in the lobby several feet away, when all of a sudden there was a large bang from where we had been sitting earlier. The clock Colleen had recently purchased and placed on the wall had fallen down. Perhaps it hadn’t been secured properly, or perhaps a gust of wind from outside had knocked it off its nail. But it was enough to make us all look at one another and ask again, is The Regent Haunted?

**People of PEC supports the Regent and its ongoing success as a landmark for Prince Edward County, consider becoming a member today.